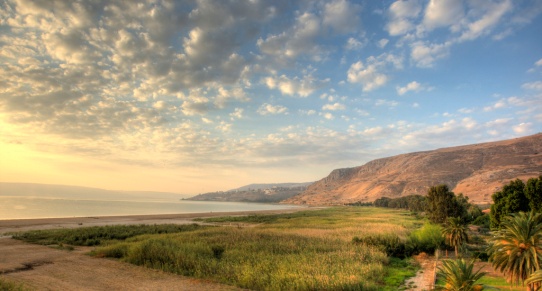 In Matthew 6:45-52 after feeding the five thousand we see Jesus ushering the twelve disciples into a boat to go before Him to the other side, to Bethsaida while He dismissed the crowd. “After leaving them, he went up on a mountainside to pray. When evening came, the boat was in the middle of the lake, and he was alone on land. He saw the disciples straining at the oars, because the wind was against them. About the fourth watch of the night (between three and six o’clock in the morning) he went out to them, but when they saw him walking on the lake, they thought he was a ghost. They cried out, because they all saw him and were terrified.

Immediately he spoke to them and said, “Take courage! It is I. Don’t be afraid.” Then he climbed into the boat with them, and the wind died down. They were completely amazed. . .”
Jesus purposely put the disciples in the boat, knowing the seas may be rough as He went up the mountainside to pray. He was able to see the disciples straining against the oars, and the massive waves crashing upon them. So often we have a hard time believing God ushers us into a boat that will weather storms. We naively believe that once we’re on “Jesus’ team” we will have smooth waters until we’re gently roared into heaven. This wasn’t the case with His most intimate twelve disciples, so why would it be true of us?!
However, did you notice where Jesus was during this storm? He was up on the mountainside, watching and praying! Were the disciples ever really beyond His reach or care as they fought against the massive waves? Not at all! And neither are we. At any given moment, Jesus may appear in the midst of our greatest trials, calming the waves that threaten to crush us. Until He does appear, trust He is on the mountain, watching your every move, praying for you! And when He determines its time to come off the mountain, He will command the waves to be still and immediately take you to the desired destination.
Are we looking for Him with expectancy in the midst of our storm or are we too busy straining at the oars believing our survival will come from our own strength to endure? Keeping above the waves may be necessary, but it’s not our only hope. There is One greater than any wave or storm known to man.
Matthew’s account of the same events shed fresh insight, as there was one who was watching—Peter! “Immediately Jesus said to them, “Take courage! It is I. Don’t be afraid.”  “Lord, if it’s you,” Peter replied, “tell me to come to you on the water.”  “Come,” he said. Then Peter got down out of the boat, walked on the water and came toward Jesus. But when he saw the wind, he was afraid and, beginning to sink, cried out, “Lord, save me!” Immediately Jesus reached out his hand and caught him, “You of little faith,” he said, “why did you doubt?”  And when they climbed into the boat, the wind died down. Then those who were in the boat worshiped him, saying, “Truly you are the Son of God.”
Are the storms we face not designed to have the same effect? Aren’t they ultimately designed to bring us to the same place where we can say whole heartedly, “Truly you are the Son of God” as we see He is the only One who can save?! And the courageous among us may even step out of the boat to meet our Lord, walking on the very waves that caused the hearts of men to fear.

2 thoughts on “Where was Jesus?”